Posted by Allyson Reithmeier
Uncategorized
Comments are off for this post

An interdisciplinary team of Carnegie Mellon University students has developed a way to make tractor trailers into hybrid vehicles. They say it could cut trucking fuel costs by 30 percent.

The company is capturing attention with its SMART Suspension System, which adds an electric motor battery pack underneath the trailer, rather than trying to hybridize the motor itself. The hybrid system captures wasted energy while a truck decelerates, and reuses it to assist the vehicle while accelerating. It also adds stability control, automatically correcting trucks that go into a slide.

The system can be installed in an hour, the team said, because they can remove a truck’s current suspension system with just eight bolts and replace the entire sliding suspension system, including the new hybrid pack. 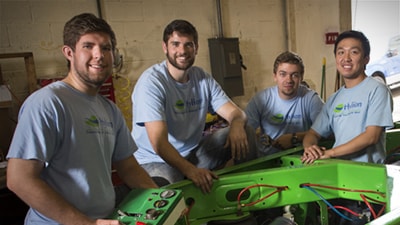 “We now have a fully working prototype, and we’re shooting to have one on the road in two months,” Healy said.

The team has presented its business plan at numerous competitions and at the Mid-America Trucking Show. They received $80,000 from venture fund SURGE for “Most Innovative Energy Tech Startup,” $50,000 from the Department of Energy’s Clean Tech Prize, $15,000 for the “Clean Energy Innovation Prize” from Wells Fargo and $10,000 for Shell’s “Technology Ventures Energy Prize.” They won third place in the overall Rice Business Plan Competition and $25,000 from the Columbia Venture Competition this spring.

After Healy presented the business plan at Rice, he received encouraging feedback.

“I was told that if we could make this happen, we’d change the whole shipping industry,” he said.

Healy thought of the idea while driving his first car, a Honda Civic Hybrid with gauges that showed the car’s wasted energy. Coupled with a hobby of race car driving, in which cars are shipped across the country in tractor trailers, he started wondering if the hybrid system could apply to trucks.

He brought up this idea to his team of fellow students in a CMU course called Energy Systems. Teams were challenged by Jay Apt, a professor in the Tepper School of Business and in the Department of Engineering & Public Policy, to create a business plan for a product that could reduce energy consumption.

Apt liked the hybrid truck idea and urged the team to move forward.

“He told us that he thought we were onto something, and we asked him to be our lead adviser. He helped arrange meetings with other professors who had knowledge of electric vehicles,” Healy said.

One such professor was Jeremy Michalek, a professor of Engineering and Public Policy and Mechanical Engineering, as well as director of CMU’s Vehicle Electrification Group. He was impressed with the team’s idea.

“A technology that saves fuel, reduces emissions, is easy to install and pays for itself in a short time could make a big impact. Overall, it has the potential to save a lot of fuel and reduce air pollution and greenhouse gas emissions,” Michalek said.

By the end of the year Hyliion will launch their pilot program, putting 20 new hybrid trucks on the road. They’re looking to collect data and validate their assertion that they can reduce fuel costs by 30 percent.

Apt is optimistic for its future.

“Competition is fierce in the transportation sector, and Hyliion can give a cost advantage to companies that use their solution. It seems to me that trucking firms that see higher diesel prices in the future and firms that want a competitive edge are their market, and it could be a good-sized one,” Apt said.

About the author: Allyson Reithmeier