A lot of folks worry that the U.S. is losing its competitive edge; that the younger generation isn’t up the gritty task of expending blood, toil, tears and sweat to develop new ideas and innovations.

For one example of why that fear is unfounded, look no farther than interdisciplinary team of Carnegie Mellon University (CMU) students who are developing a very simple and inexpensive way to convert diesel-powered tractor-trailers into hybrid vehicles – cutting fuel costs by up to 30% in the process.

The CMU kids (there’s enough grey in my beard now so I can call them that) developed what they call the “SMART Suspension System,” which adds an electric motor battery pack underneath the trailer, rather than trying to “hybridize” the tractor’s motor.

The team’s hybrid system functions by capturing energy when the combination vehicle decelerates, then reuses it to assist the vehicle while accelerating. Interestingly, the suspension also adds stability control on top of its energy-capture mission, automatically correcting trucks that go into a slide.

Now, sure, this is not a completely newfangled idea – hybrid propulsion, capturing and re-using braking energy, and stability control have all been around a while in the trucking business.

Yet the CMU kids are taking a different and very critical leap with this technology – how to make it simpler and cheaper.

It’s interesting, too, to hear how Thomas Healy, the team’s leader, got the idea for the SMART suspension. 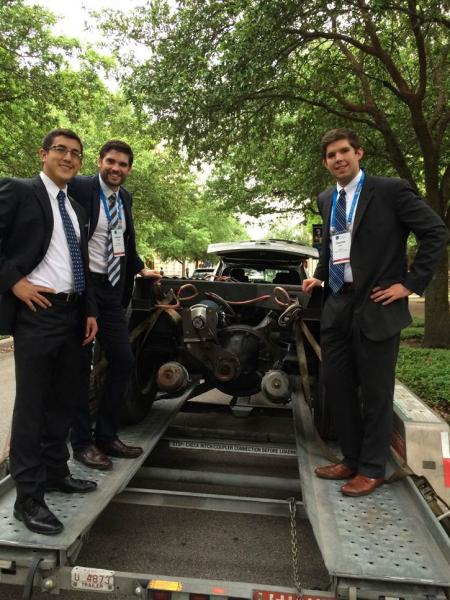 While driving his first car, a hybrid Honda Civic, his gauges kept highlighting all the “wasted” energy lost during braking. Also, as a racing enthusiast, he kept noticing that tractor-trailers served as the primary transportation mode for race cars.

That’s when he started wondering if hybrid systems like the one powering his Honda could apply to commercial trucks.

Now, again, sure – in some ways you could argue Healy just re-invented the light bulb, for there are numerous hybrid systems out there in the market already for trucks of all sizes.

Yet the Achilles heel for such technology in the commercial space is cost. In many cases, the return on investment (ROI) simply isn’t there for what one could describe as “traditional” hybrid technology, which typically includes an electric motor, battery pack, and re-configured transmission; all adding up to more dollars and more weight.

That’s why the hybrid path Healy’s team is taking – how to make hybrid systems cheaper and simpler – could change the outlook for this technology in the trucking world.

Another good part of this story is that Healy’s peers and professors encouraged him to pursue his idea.

Healy said he brought his idea to a team of fellow students in a CMU course called Energy Systems – teams challenged by Jay Apt, a professor in CMU’s Tepper School of Business and in the Department of Engineering & Public Policy, to create business plans for products that could reduce energy consumption.

Healy said Apt liked his hybrid truck idea and urged his team to move forward with it. “He told us that he thought we were onto something, and we asked him to be our lead adviser,” Healy noted. “He helped arrange meetings with other professors who had knowledge of electric vehicles.”

One such teacher – Jeremy Michalek, a professor of engineering, public policy, and mechanical engineering, as well as director of CMU’s Vehicle Electrification Group – summed up why Healy’s concept could be a big game changer for hybrids in trucking: “A technology that saves fuel, reduces emissions, is easy to install and pays for itself in a short time could make a big impact.” 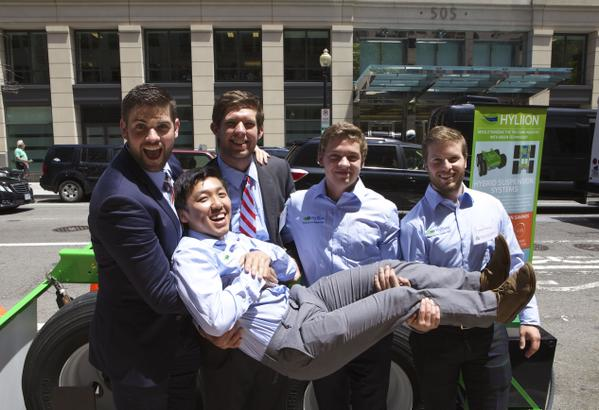 So Healy’s group created a company to pursue this hybrid propulsion concept – a company they named Hyliion – built a prototype and went looking for monetary support.

And boy did they find it.

They received $80,000 from venture fund SURGE for “Most Innovative Energy Tech Startup,” another $50,000 from the Department of Energy’s Clean Tech Prize, $15,000 for the “Clean Energy Innovation Prize” from Wells Fargo and $10,000 for Shell’s “Technology Ventures Energy Prize.” They also snagged third place in the overall Rice Business Plan Competition and $25,000 from the Columbia Venture Competition this spring.

To date, Hyliion has put two working models of its SMART suspension on the road and hopes to have a full-bore pilot program up and running by year’s end that involves 20 tractor-trailers “hybridized” in real-world use to collect data to validate that its technological package can indeed reduce fuel costs by 30%.

Won’t it be something if they prove it does.

About the author: Allyson Reithmeier